The Flips – Damn You & Damn Me, Too review 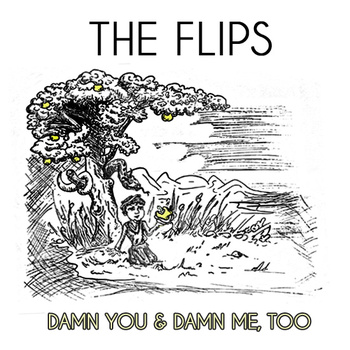 The Flips debut EP, Damn You & Damn Me, Too is something a little bit odd. It’s a band experimenting with a tonne of different sounds – some work and some don’t. But then that’s the beauty of progression.

While the opening of the EP, Sharp As Knives, sounds like early Weezer – other parts sound like Alex Turner’s solo material. But then again, there are some parts that sound like your every day run of the mill rock band. But then that’s not a bad thing. Putting together an EP like this allows the band to show off their versatility while deciding which genre suits the band best.

I’m Still has a similar rock feel to the latest Foo Fighters record – it’s heavy and chock full of riffs. Always a good sign for a rock band. There I Shook is a fantastic acoustic track. It’s perfect, roaring with emotion and somewhat elegant. It’s the best way to close out Damn You & Damn Me, Too.

On Damn You & Damn Me, Too there are good moments and there are bad moments. But taking a minute to reflect on it, the bad moments aren’t necessarily a problem or something to worry about. If anything, the only criticism that can be given to The Flips is that they need to decide on a certain sound. While this work at the moment, it feels like they haven’t quite found their feet yet, but when they do it’s sure to be a big moment for them and for everyone who is lucky enough to hear them.

Damn You & Damn Me, Too is simply a starter in the right direction for the band. From here on out though, The Flips sound will more than likely progress into something different and quite special. But we’ll all have to wait for that. Patience, after all, is a virtue.

This entry was posted in Album Reviews and tagged album review, album reviews, the flips. Bookmark the permalink.